Our research programme addressed a pressing healthcare challenge: the need to improve the quality (effectiveness, humanity and equity) of care for people living with dementia during an unscheduled hospital admission.

These figures are considered to underestimate the volume of admissions, with the number closer to one in two beds including people whose dementia is still undiagnosed. Some hospitals report this patient group represents as many as half of their acute admissions (Alzheimer’s Society 2016).

There has been increasing recognition that action is required now to improve the experience and outcomes of the increasing numbers of people living with dementia admitted to hospital.

A large number of government inquiries and reports have identified wide-spread poor dementia care in hospitals, with wide variations in quality. This variation means that people living with dementia will experience poor care at some point in their care pathway through the hospital.

Almost all people living with dementia will have at least one unscheduled hospital admission following their diagnosis, however, once admitted they become highly vulnerable.

People living with dementia are at significantly higher risk of delayed discharge and are likely to experience some form of functional physical or cognitive decline during their admission (Mukadam and Sampson 2011).

One in four people living with dementia will die during their hospital admission, with a third declining to such an extent over the course of an admission that they are not able to return home and live independently. This means moving into long term supported care, breaking up families, homes and care networks.

Dementia is the only condition in the top 10 causes of death in the UK without a treatment to prevent, cure or slow its progression. The work of biomedical science and the research investment in this is critical to changing this and improving quality of life.

However, we cannot wait for this, we need significant investment in research, in training and education, to support our hospitals to deliver evidence based high quality care to ensure people (and their families) can live well with dementia now, and that hospitals are a site of treatment, recovery and re-enablement when people living with dementia require them.

In response, our research provides foundational understandings of the organisation and delivery of care within the contemporary hospital and its impacts on both patients living with dementia and ward staff. Applying ethnography and sociological theory to providing new knowledge and theoretical developments in understandings of the cultures, organization and delivery of hospital care. 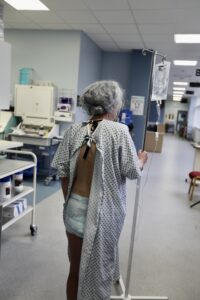 Understanding how to facilitate continence for people with dementia in acute hospital settings: raising awareness and improving care. 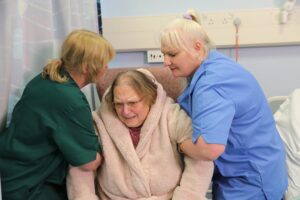 Understanding the everyday use of restrictive practices in the care of people living with dementia during a hospital admission: reducing inappropriate use, identifying good practice and alternative approaches to reduce risk and improve care.

Underserved and overlooked: Investigating the management of refusal of care in people with dementia admitted to hospital with an acute condition.